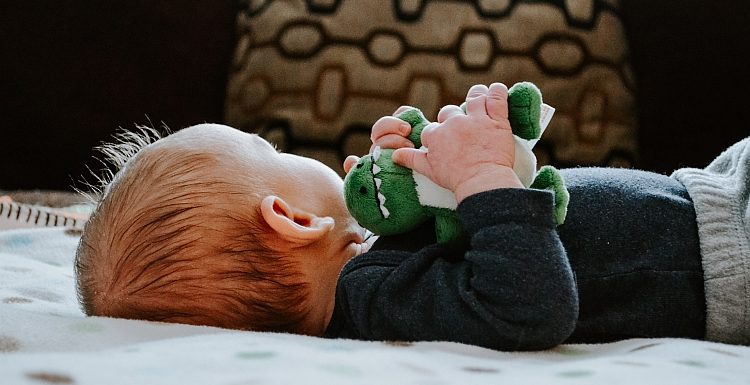 You’re still like a baby… well, at least in some ways.

I presume you do eat solid foods by now, and you also probably play with more elaborate toys than teddy bears or rattles.

But some things hardly change over the course of a human lifetime – and they explain why us humans have such a strong predisposition to discover structures, and why we search for patterns everywhere.

Are you ready for a travel in my magic time machine? Then let’s transfer back in time a bit… back to the time when you were still a wee baby…

(That’s apart from the obvious, subconscious stuff like breathing and digesting, of course.)

In order to develop these crucial abilities (communicating, acting, and making sense of the world), you needed one essential skill: to perceive structures and patterns.

Without knowing the underlying structures and patterns of your world, it would’ve been impossible for you to communicate, to act or to make sense of that world.

If you ever thought about linguistics (i.e. the science of speech and language) at all, you probably thought it’s boring as heck and just about grammar anyway.

But nothing could be further from the truth!

(Yeah, I’m pretty passionate about linguistics. And yep, I think it’s one of the most overlooked and underrated sciences!

And you definitely should read more about it, e.g. here on Gretchen McCulloch’s excellent and very entertaining blog All Things Linguistic!)

So while we’re in our little time travel back in your babyhood, like all babies, you were one of the greatest, most industrious and most diligent linguists of the world.

You were constantly analyzing patterns and structures in speech and in non-verbal communication around you.

(Smile a toothless smile? Mom cuddles you. Wail as loud as you can? Dad comes running to feed you or change your diaper. Bingo!)

Second, the ability to act in a purposeful way.

From their first day on earth, all little babies are able to move – somehow.

But accidentally hitting your own head with your fist is a far cry from the purposeful action which is required to feed yourself later in life.

That kind of purposeful action requires you to get a pretty good feel for your body and the space surrounding it. Also for other moving and non-moving objects. And of course you need to be able to plan ahead, pursue goals and overcome obstacles.

Even the most basic form of baby action (like moving that chewing toy into your mouth to nibble on it, instead of hitting your own head with it), required some understanding of objects and of object categories.

(Most toys were “movable” for you even back then with your limited strength. Moving your cod was out of the question, though – if you wanted to nibble on that, you’d have to move your head instead.

So we’re back to the very essential skill of perceiving structures and patterns.

Without that skill, you’d never have been able to build up all the world knowledge that babies build up and that still serves you very well today.

And thirdly, the ability to make sense of your world.

For example, you nibble a bit too hard on your own hand, and something hurts. You do the same again an hour later, and it hurts again. Maybe there’s a pattern there?

What “making sense of the world” really means in this context simply is your ability to perceive structures and patterns, to put things into categories and attach labels to them.

So, to sum it up, back in our time machine, being able to perceive structures and patterns was THE life-saving skill that you couldn’t do without as a baby.

And if you still don’t believe me, just imagine you hadn’t had this skill back then.

Or you’d have had this skill, but not the drive to use it. (Hey, why bother with detecting patterns and categories when you’re being fed several times a day, right?)

Then hop back into our time machine to the present day, and just imagine how your life would be different from that of a few-days-old baby.

The answer is simple: You’d be a bit taller and heavier (and maybe hairier), but you’d still be lying in your cot, hitting your head with your chewing toy while waiting for somebody to feed you.

Now, of course, the development of children is much more complex than this.

(If you want to learn more about that, get a good book on child development or get yourself a couple of kids so you’ll be able to compare their development… 😉 )

But I hope I’ve been able to make one main point clear:

Without the drive to perceive structures and patterns, you wouldn’t have survived for long in this world.

Let that sink in for a second.

Your drive to perceive structures and patterns is one of the absolute essential survival skills that you need in this world.

You think it’s critical for your survival to get food on the table, or to avoid being hit by a cab in rush hour?

Well, if you couldn’t detect structures, you wouldn’t be able to do any of that.

This drive is so deeply rooted in us as humans (and also in a lot of animals), that we simply couldn’t switch it off even if we wanted to.

And while the times of your baby-ness are long gone, the drive is still there: You still want to communicate, act in a purposeful way and make sense of your world.

In short: You still want to perceive structures and understand patterns.

Or rather: You don’t want to, you simply have too. There’s no switching that drive off – thankfully.

So this skill, which was essential for your survival even back as a baby, is also the reason why you enjoy reading our texts on The Hidden Things nowadays:

They satisfy your desire to make sense of the world, to perceive structures and to detect patterns.

And hey, they’re a lot more fun (and more sustainable) than taking drugs. So go ahead and indulge yourself! 🙂

Inside said emails, we send you pointers to more great content, by us and by others. The occasional mention of a relevant product. And also some subscriber-only stuff.

We'll send you emails whenever we have something of value to talk about. None of the "shit-it's-Friday-again-and-we-still-need-to-send-this-week's-email" kinda stuff!

Also, there is an unsubscribe link in each of our emails, and we'll never sell, rent or otherwise abuse your emails (or your trust)!

And if you want to read the long version, here's our privacy information.